Scott Fisk is a Professional Hot Rod Illustrator from central Vermont. He owns and operates an illustration studio called “Studio 669”. From this studio Scott launched “STUDIO 669.net” exploiting his unique style of automotive illustration. Graduating from Butera School of Art, Boston class of 1992 with a degree in Signage and Graphic Design, Scott has been a sign pro/mural artist ever since.

“It’s the book I wished I had as a kid, it’s piled with imagery with just enough tutorial content to follow along. I spent over a year developing it and making it happen, and since I “self-published” this hard cover book; I was able to design and build the book my way. Sink or swim the book is not just a direct extension of my style of illustration it’s a direct extension of my personality as well!”

Scott stems his style from a new breed of illustrator, where “old” is “new”.

“There was a time when everything fell off of finger tips, not keyboards and design programs. I do it the way it used to be done. I like having nothing to hide behind except the swipes of my prismacolors’, yet when I need that “tool” I use it as yet another weapon of choice; not crutch.”

Considering the fact that Scott does most of his illustration work totally from his left fingertips unassisted by computers when he is able, gives him an “Old School” quality making him a rare commodity. Because of this he is HIGHLY sought after in this “Kulture Scene” for his dynamic approach. Scott also draws for several “Kulture Clothing Companies” as well as freelance work for individual clients, all along maintaining the “IN YOUR FACE!” style that 669 is well known for.

“As artists’, we are to evolve, that’s our mission our “genetic” characteristic. We NEVER settle for the same every day, that’s why we are artists’.” 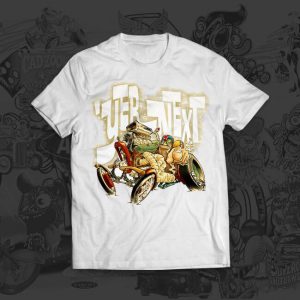